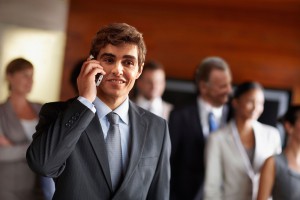 About a month ago I reached out to a company about a potential partnership.  I found the Business Development person on LinkedIn and asked him if he wanted to have lunch to discuss the partnership.  He seemed fairly interested and we exchanged emails and emailed each other about 5 times, including a couple emails on a Saturday.

That following Monday I decided that the emailing was getting old and with a 5 minute phone call we could clear up a few things and schedule lunch at the same time.  Using the phone number in the signature of EVERY email he sent me I gave him a ring.  The first time was about 10 AM and I got the his voicemail.  I have a hard rule – I never leave voicemail when trying to establish a relationship as most people don’t want to listen to it or won’t even take the time to listen to it.

About 2 PM I decided to try his number again.  This time with the same results as the last…voicemail.  I hung up and started working on something else that popped up.  Around 3 PM I decided to write the guy an email as I hadn’t heard from him since Saturday and wanted to progress the conversation before it got stale.  Just as I started typing the email my phone rings.  It’s him.

I answered the phone and he asked who this was.  He said, “Oh, hey.  I’m busy right now.  Can we continue our conversation over email?”

I thought this was odd, but agreed anyways as I’ve been in situations where I didn’t have time for a call that day.  I continued to write my email to him and hit send when it was done.

Not too long after sending the email I get a response from the guy that said, “he didn’t feel that making two unsolicited calls to his cell phone was a great way to start a relationship that he’s going to pass on doing business.”

First off, why is the guy putting his cell phone number in emails if he doesn’t want people to call him?  Second, this is 2015, who gives a crap if someone calls your cell phone?  Third, this guys in Business Development!

I responded with an apology, but received no response.

After scratching my head for a few days and waiting to see if this guy would realize how much money we could make together, I decided to email the CEO.  I didn’t mention the other incident as I didn’t want to start off my relationship with the CEO this way and I figured the biz dev guy didn’t mention anything to him about me.

I sent a very short and simple, but straight forward email to the CEO about how we could make lots of money together and asking if he had time for a quick call.  His response: Unsubscribe.

Are you kidding me?

What do you think?  Should he be mad that I called him?  Should he have stopped doing business because of my calls?  Leave a comment below to let me know your thoughts.