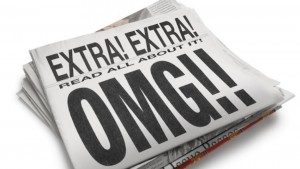 I think the media, especially the so called news channels, have turned the United States into a soap opera.  Maybe I was naive when I was younger, but I don’t remember people despising other people so much and I more remember that as a whole, Americans truly wanted to work towards a better nation.

Now all you see and hear on the news is peoples’ opinions on other people and things rather than cold hard facts.  That’s what the news used to be, real facts.  People would listen, watch or read the news and get facts.  Then they would use the facts to form their own opinions and have discussions around the facts.  Were the facts accurate?  If they are, what do they mean?  How do we change them for the better?

Today our media is mostly people forming an opinion and then providing their opinion to the readers, listeners and viewers.  So now people have to decide, is this an opinion I agree with?  With most people being too lazy to go fact check they just accept the news’ opinion as their own.

We need to start demanding that journalists start reporting real facts again and only stick to facts.  We can do this by turning of the new channels once they start injecting their opinion and stopping to read things like the Huffington Post which confuse opinion as real news.

I just did a search to find some fact based news sites to recommend and what do I find?  Google is now wanting to rank sites based on actual facts and not links due to the amount of fact-free “news” articles that spread like wildfire.

Please, I urge you to start demanding that journalists report real facts and do real reporting.  Reward those that do by consuming their content and punish others that don’t by ignoring their content.  The future of our nation depends on it if we truly want to keep the United States as the greatest nation on earth.