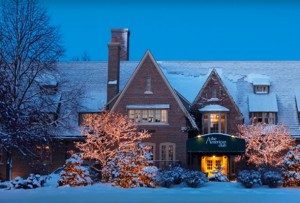 One of the perks of a past job of mine was that I got to travel all over the United States, including many smaller towns and cities.  One of my projects lead me to Sheboygan, Wisconsin.  Upon looking for hotels in Sheboygan, I came across what was the jewel of the town, the Holiday Inn Express.  I called up the hotel to book a room for the week and learned that they only had one, “very expensive” room available.  It happened to have a jacuzzi tub in it and was going to cost me a whopping $120 per night.   I almost laughed when the girl told me the price because she said it with such a straight face and was so worried that it was going to cost too much.  I understand that everything is relative, but it was still cute that she was so worried about my budget at $120 a night.  Upon showing up to the hotel, I realize why she was since it was right next to a truck stop and the average room cost around half as much.

What does this have to do with The American Club in Kohler, Wisconsin?  Well, upon living one of the most surreal weeks of my life in Sheboygan, WI, I learned about a little town just outside of Sheboygan called Kohler, WI.  If you’re thinking, I know that name Kohler, it’s because you probably see it every time you use the bathroom.  Kohler, WI happens to be the world headquarters for Kohler Co., a leader in plumbing fixtures, like toilets, sinks, tubs, and faucets.

In addition to being the headquarters for Kohler Co., Kohler is a quaint little town with a village of 2200 residents and home to The American Club.  Taken from the resort’s website:

The American Club once provided housing, meals and recreational facilities for immigrant employees who could not afford housing. Today, The American Club is a Forbes Five-Star Resort Hotel and the Midwest’s only AAA Five Diamond Resort Hotel providing unique, luxurious décor that creates a singular quality experience room by room.

Back to my story…

Upon finding out about The American Club, I decided to take a drive out to see what the resort and town was like.  I fell in love instantly!  I valet’d my car and headed in to find a place to eat.  I was going to go for one of their fine dining restaurants, but heard that a pretty good band was playing in their more casual restaurant, The Horse & Plow.  I plopped myself at the bar, ordered a schnitzel and a beer, and had a good time.

Before leaving that night I inquired with the reservation desk as to what the rates were for the following visits I would be making to Sheboygan.  To my surprise, the rates were around $150 per night because it was during the winter, which is off-peak season.  This was back in 2000, so before you get excited, you might want to call to find out the current rates.  Oh, and the first night I stayed there the temperature was -4 degrees.

Despite the winter weather, I did have a great time in the three plus weeks I spent at The American Club and have wanted to go back ever since.  Doing research for this post, I see that they have an annual Kohler Festival of Beer that I might just have to attend in the coming years.  Well, there’s that and their four 18-hole golf courses that I can play.  Don’t forget the 9 different dining establishments.

If you’re looking for a great place to go with your significant other that’s not the usual beach or mountain destination, then I recommend taking a trip out to Wisconsin and enjoying The American Club and Kohler, Wisconsin.

Have you been to Kohler or Sheboygan? Any recommendations for people that go there?  If so, please leave them in the comments section.