It’s the middle of summer right now and while I’m not a big drinker, it’s often nice to have a refreshing alcoholic drink after a long hot day.  One of my recent favorites is the Moscow Mule.  This is really just fancy for saying I want a vodka with lime juice and ginger beer, but there is a little more to it. 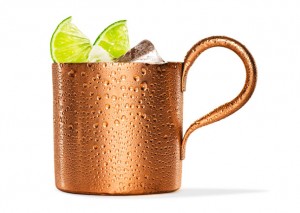 The Moscow Mule is served on the rocks, typically in a copper mug.  Place the ice cubes in the mug or class, poor in the vodka, lime and ginger beer and stir.  Add your mint and lime wedge and you’re good to go.   Enjoy this crisp and refreshing drink.

I have tried the Moscow Mule with three types of ginger beer so far, Cock N’ Bull, Reeds, and Bundaberg.  So far I’d have to say that Cock N’ Bull is my favorite, followed by Bundaberg, and then Reeds.  Though, while I have rated them, they all make a great Moscow Mule.  By the way ginger ale is NOT a good substitute for ginger beer.

One of the problems with the Moscow Mule is that ginger beer is not the easiest mixer to find, but it is becoming more popular.  BevMo seems to have the best selection of ginger beer that I can find in the San Jose, CA area.  You can also buy the copper mugs there.  WholeFoods is a close second.  I was surprised to find that my local Lucky grocery store added Reed’s to their shelf the other day.

The problem with finding ginger beer also extends to the bar scene, but next time you’re out, ask if your bartender if they can make you a Moscow Mule.  If they can, you won’t regret it!

Note:  You can also make a Kentucky Mule by substituting vodka with Kentucky bourbon.

One thought on “How to make a Moscow Mule”