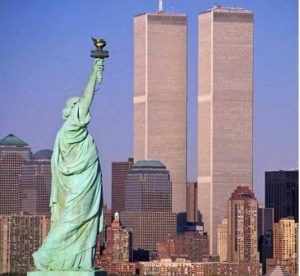 As I’m about to go to bed I realize that tomorrow I will wake up and relive a swirl of emotions. 15 years ago I was in San Antonio, Texas. I was staying in a Hilton. At this point I was sleeping, likely with a bit of restlessness. Not because I could predict what the day’s events were going to bring, but because the 10th had been a challenging day with my client and I wasn’t looking forward to another like it.
The earliest memory I have of that morning was was placing a new CD into the CD player of the rental car and driving to the client’s, Time Warner, office. Just 10 days earlier I had successfully taken them live on a new software that ran all of their cable TV advertisements. The project was a bit groundbreaking as it was the first time in the USA that a cable company didn’t host the software on premise; it was in what we’d call “the cloud” today.
I was 24. Technically not old enough to rent a car, but I was already a road warrior. I was accustomed to travelling alone; most times I preferred it.
I remember driving by the a military base, Air Force I think, and having 8 jets scramble over my car as I drove just past the end of the runway. “Wow, that was crazy. Must be an exercise,” I thought.
My next memory is parking the car, the white building, a few stories high, about 50 yards away. I had listened to some upbeat music in hopes that it would set the tone of the day. I had a bit of a bounce to my step.
I then remember walking into the lobby of Time Warner, TVs blanketed the wall. There were a couple folks watching intensely, the World Trade Center was on fire. “What happened?” I asked. “A plane flew into the building.” someone responded. “Crazy.” I thought.
I was just getting ready to head back to the department I was working with and then it happened. The second plane flew into the frame of the TV. “Oh shit!” I thought, maybe even said it. We all know the image.
I rushed back to the team I was working with. My memory tells me they hadn’t heard yet. I think I broke the news to them, or maybe it was their boss who had a TV in her office.
Next thing I remember was discussing how we needed to remove ALL ads from the air. The team quickly got to work; I remember some tears being shed. There was no time right now, we had to act fast and they were just getting used to the new system.
I remember stepping out to call my parents. My dad was travelling also, “was he near D.C?” I thought.
That afternoon I attended mass at a local church with the team from Time Warner. It was comforting. I was in a foreign place with uncertainty on everyone’s mind.
That night I found myself glued to the TV in my hotel room. I remember sitting on the edge of the bed. I probably wasn’t the only one in the hotel like that. “This is insane!” I thought. I shouldn’t be alone right now. I decided to leave and drove to the River Walk.
I don’t remember why the River Walk, perhaps I thought people would be down there. I was right. There was a little bar, Twist, that was packed. I couldn’t believe how lively it was. It sounded like people were having a good time. They were.
Everyone was friendly. In that moment the collective body realized what really mattered in life. There was no sense of judgement. No preconceived thoughts about people. Nobody was sizing the other person up. It was real conversation; open, honest, sincere – dare I say, “pure?”
People talked about being scared. Discussed what they thought the future held. Talked about where they were that morning. What their thoughts were.
I remember thinking, “If any good has come out of this tragedy it’s that it has brought the people of this country together.” It was a beautiful moment in a twisted time.
——–
I pray that as a country we can find that moment again, but I’m worried that it will take another tragedy to do so. So I ask this of you. Even if it’s for just one day, remember how we came together as a country 15 years ago and relive it. See the good in people. Throw judgements away. Have open, honest and sincere conversations. Our country, our neighbors, ourselves will be better for it.